Hypocrisy is the practice of claiming to have a belief or behavioral standard to which one’s actions do not conform. Most politicians dread being caught being hypocritical and go out of their way to explain—sometimes quite awkwardly—that what is viewed as hypocrisy is merely an “evolving” position.

Donald Trump has taken hypocrisy to new levels however. He is not only blatantly hypocritical but arrogantly denies that he ever said many of the things he actually said. Below are some examples of Trump hypocrisy.

In 2015 when Michelle Obama and her two daughters were in Saudi Arabia and didn’t cover their heads Trump tweeted: “Many people are saying it was wonderful that Mrs. Obama refused to wear a scarf in Saudi Arabia, but they were insulted. We have enuf enemies.” (Jan 29, 2015) 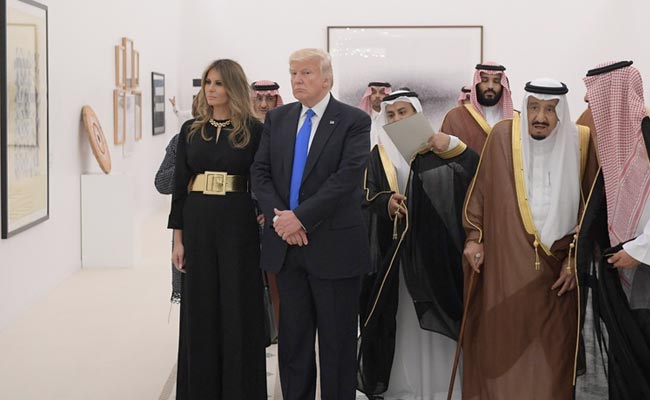 But when Trump recently visited the Saudi Kingdom Melania was also scarfless. Interestingly, the Saudi’s apparently were quite taken with her. She was in many respects the ideal wife—quiet, beautiful, and deferential to her husband.

Trump continually criticized Obama for playing golf. Over 8 years in the presidency Obama was seen on the links 333 times. On October 13, 2014 Trump tweeted: “Can you believe that, with all of the problems and difficulties facing the U. S., President Obama spent the day playing golf.” In 2016 in Virginia he said: “I’m going to be working for you. I’m not going to have time to play golf.”

While it is sometimes difficult to determine exactly when Trump plays because his staff tries to hide it from the press, as of May 16th he has apparently played 21 times. That comes out to about twice the rate of playing as Obama.

During and before the presidential campaign Trump often criticized Obama for abusing power by issuing executive orders. Here is one of his twitter attacks on the subject: “Why is Barack Obama constantly issuing executive orders that are major power grabs of authority?” Over his eight years in office Obama signed 276 executive orders, actually a fairly low number compared with other recent presidents. In 2015 during the campaign Trump said in reference to Obama not making “deals”: “I don’t think he even tries anymore. I think he just signs executive actions. . . . You’re supposed to cajole, get people in a room, you have Republicans, Democrats, you’re supposed to get together and pass a law. [Obama] doesn’t want to do that because it’s too much work. So he doesn’t want to work too hard. He wants to go back and play golf.”

How is Trump doing? As of May 28th Trump has issued 36 executive orders. That is already more in his first 100-some days than Obama averaged per year over his entire presidency.

One of Trump’s early criticisms of Obama was about his lack of transparency. In 2012 Trump took to Twitter (again): “Why is Barack Obama spending millions to try and hide his records? He is the least transparent President—ever—and he ran on transparency.”

But as president Trump seems to have found that transparency is not something to be valued. While Obama released the visitor logs of the White House to the press, President Trump has decided that, for budget reasons, it is too costly to follow that practice.

But perhaps Trump’s largest failure at transparency is his failure to make any of his tax returns public. Indeed, one has to go back 40 years, to the presidency of Gerald Ford, to find the last president who failed to release at least one year of their returns. Many presidents as well as presidential candidates released numerous years of returns. Trump’s excuse is that his returns are being audited, but actually all presidents’ returns are automatically audited and that has not prevented them from releasing their returns.

Does any of this really matter anymore?

The power of hypocrisy—or the revealing of hypocrisy—is that there are agreed upon norms of behavior which, if violated, are found at the very least disturbing. However, in the new postmodern political world that Trump habituates (masters?) everything is “up for grabs.” Truth is debatable, facts can be countered by “alternative facts,” and norms are continually violated. As long as one is emotionally attached to a politician one can accept contradictory behavior by that politician even if such support goes against one’s own interests and beliefs.