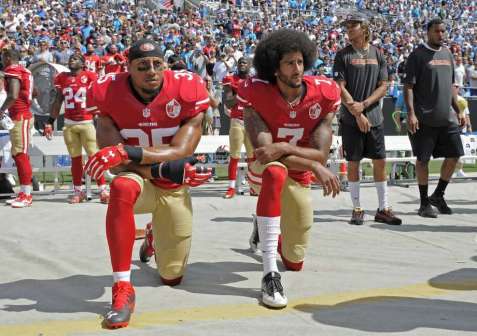 As a political scientist, I view the controversy over the NFL players kneeling during the national anthem as grounded in two related questions:

1)  How did football (and just about every other sport) become a forum for displays of patriotism?

2)  Why is the kneeling of a player during the playing of the national anthem viewed as an insult to veterans in particular?

So, in answer to #1, there is really no good reason why sports have been aligned with militarism. Some have theorized that joining the two connects nationalism with aggression; or winning with patriotism. “We (meaning the US) are Number 1!” But the history of this conjoining of (male) sports teams with national patriotism has its origins in WWI and this grew stronger during WWII.  During the fighting of the world war, it was viewed as unseemly that while other men engaged in international warfare to save the country and indeed the world, professional athletic males in the United States were playing their sports rather than engaging in true warfare. Sporting events were also an opportunity to mobilize much needed public support. Thus, patriotic moments were injected into the games: the playing of the national anthem or patriotic songs, the presence of the American flag, flybys or honor guards by the military, and the recognition of war veterans. But this association continued far beyond the world war years. It is now seen as part and parcel of what it means to be engaged in athletic competition. As a result, displays of patriotism infuses football, baseball, soccer, hockey, and so on.

But think about it…this is a social construct that survived its time. This was a nationalistic practice that originated as a way of defending why able-bodied males should continue to play competitive (and lucrative) games during a time of war. The national symbolism has continued throughout the decades although it is now disconnected from the original purpose it served.

In answer to #2, I can understand that some people may be offended by NFL players who kneel in protest during the national anthem. But why is this form of symbolic speech interpreted as an insult to veterans in particular?

This protest began last football season (2016) by Colin Kaepernick. Because it was a silent form of protest, in later interviews he had to articulate the meaning in words. His explanation was that the physical gesture was a sign of protest about the troubling incidences of black men shot by police officers who were not punished by the legal system. Kneeling was chosen a “respectful,” peaceful, and silent protest about racial inequality in the country. 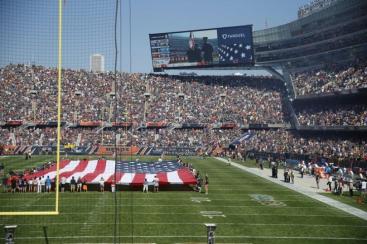 So how exactly does this implicate veterans?

It doesn’t. The protest is an indictment of the American legal system, law enforcement system, and systemic racism within the culture. But it is not in any way aimed at those who have served in the military.

Why? Because the flag, the national anthem, the Constitution, and patriotism at large does not belong to veterans exclusively. Yes, the nation should thank veterans for their service and should provide them in turn with respect and concrete resources to integrate them back to civilian lives (e.g., imagine a VA that is efficient and responsive and generous). However, criticisms about the nation, no matter how cutting, are not aimed at veterans. They are directed at society at large. Although symbolic speech, these actions invite reflection and conversation. Are they pointed and sometimes painful critiques? Yes, they are. But does kneeling constitute treason or an attack on veterans in particular; I’d say not. Political protest is and should be a protected right. That is necessary in any society that aspires to be democratic. Dissent should be met with conversation, not misdefined or misaligned as attacks on veterans or unpatriotic expressions in need of punishment.

It is a bit ironic that this sensitivity to the feelings of veterans as the victims of the NFL protests is taking place during a time when conservative commentators have been unforgiving in their criticisms of college and university policies designed to protect student “snowflakes” from upsetting speech, topics, or situations. Veterans, who have been redefined in recent years as heroes, are now being constructed as victims in need of protection from kneeling athletes. And so, in the words of Pres. Trump, a protesting athlete is a “son of bitch” who should be fired.

Some might say that political protests are unwarranted given the time and place consideration that these occur during sports contests, not political events. But, as I wrote earlier, the infusion of symbols of patriotism during athletic competitions is an odd coupling to begin with. If patriotic displays are embraced during games, one can expect, and one is expected to tolerate, differing views in response.

3 thoughts on “Stand or Kneel? Sports and Politics (by Sasha)”