Did you know that there is a strong connection between the traditional crafts of women and political activism?

Throughout American history, knitters, quilters, and sewers have been activists who used their needles to needle the powers that be.

The most recent example comes from the Women’s March of Jan 21, 2017. Those pink “pussy hats” won by many protesters were neither worn by accident nor store bought. The Pussy Hat  Project recruited volunteer crafters, taught skills, provided patterns, and organized how to send hats to DC marchers. In support, individual stores offered discounts on pink yarns. See:  www.pussyhatproject.com

I come from a family of “crafty women,” so I’d like to share some of the examples of “womanly hobbies” that have turned political and even subversive. Consider these:

1)  Comforters for Children: In many communities, women knit and crochet afghans or sew quilts for police patrol cars, hospitals, NICUs, shelters, and schools so that children in crisis can be comforted by something that they are wrapped in and that is theirs to hold on to through whatever comes next. In addition in colder climes, mittens, hats, and scarfs are made by crafting societies as well as individuals and gifted to children in need. 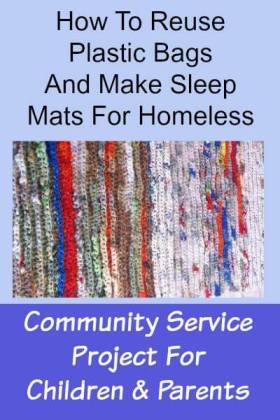 2)  Bedrolls for the Homeless: In Sarasota, Interfaith Outreach of the Unitarian Universalist Congregation of Venice distributes sleeping mats that are crocheted from 700 recycled plastic grocery bags cut into loops. They measure 3x 6 feet and are lightweight, waterproof, and given free to those who sleep outside in the elements.

3) The AIDS Memorial Quilt: Perhaps the best example of how quilting was politicized by both women and men, the AIDS quilt provides a visually striking memorial to those who died from AIDS. The size of the individual panels are deliberately constructed as panels the size of a grave. When there was political resistance to funding AIDS research, the quilt raised public awareness of the extent of the crisis and the need for a public policy of compassion.4)  Political Statement Quilts: Whether it is pro-temperance, anti-war, or in celebration of the the Constitutional Bicentennial in 1987, quilters have voiced their political views by piecing together fabric works of art that become banners for their causes. Some of the patterns for quilt blocks are aptly named: Burgoyne Surrounded, Whig Rose, 54 40 or Fight, Union Star, Drunkard’s Path.

5)  Civil War Quilts: During the devastation of the Civil War, women both North and South sewed hospital quilts for the wounded. One surviving quilt has embroidered on the back: “While our fingers guide the needle, our hearts are intense (tents).”

6)  Underground Railroad Quilts: According to the book, http://amzn.to/2jJh7G0 Hidden in Plain View, quilts were used as a signal for slaves escaping to freedom on the Underground Railroad. A log cabin quilt with a black chimney square (rather than the traditional red square) was hung outside on a clothesline to indicate that this was a safe house. Quilts were also stitched with symbols like the North Star, Flying Geese, and Jacob’s Ladder to provide a map of directions and distances for those escaping to freedom. The signal they sent was in “plain sight” and yet invisible to those who didn’t even notice these household items much less their subversive nature.

7)  Sewing Circles:  The very first place that suffragist Susan B. Anthony ever gave a political talk was at a sewing circle—a place where women were not monitored by men and where it was thought that the main topic of discussion was gossip—NOT!

So, my sisters, who or what are you needling?