I wear this stylish red mesh  vest when my humans take me for a walk. But I am not a service animal.

With a charge card and going to the right online site, I could obtain a service dog certificate and an ID. And for another $30, I could replace my ordinary (although fetching) vest with one marked with the designation “Service Dog.”

Some Service Dogs wear these vests, but they don’t have to. And so online sites that push their sale are a bit suspicious. Service Dogs do not have to show anyone documentation. Because of the privacy provisions of the Americans with Disabilities Act, only two questions can be asked regarding the person and their service dog: Is the animal required because of a disability? What task has the animal been trained to perform related to that disability (e.g., leading a blind person; pulling a wheelchair; alerting about on oncoming seizure.) No certificate or doctor’s letter can be demanded as proof.

A service dog is in fact not a pet but a working partner that is thoroughly trained to provide a service directly related to a person’s disability. Here in Sarasota (and their Palmetto campus), Southeastern Guide Dogs are a great example of an organization that breeds, trains, and matches service dogs to humans with disabilities. It is important work. 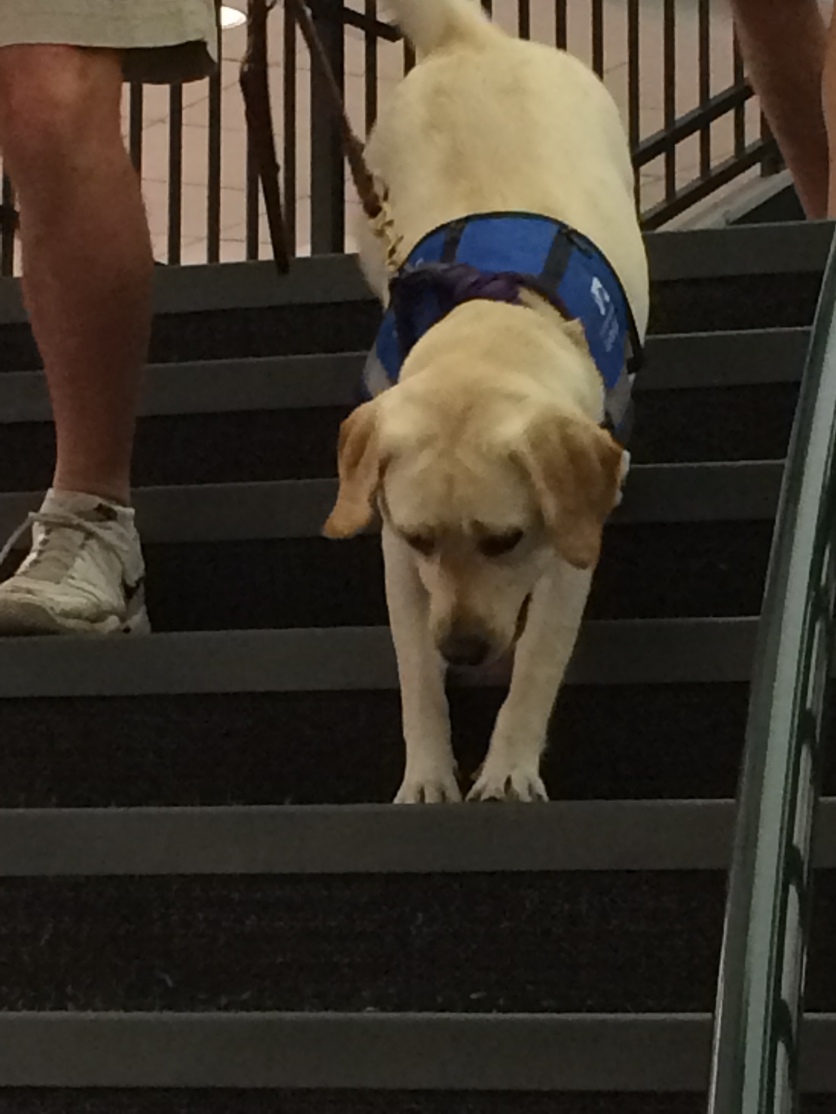 But if my humans wanted to scam the system, they easily could. They could buy me a Service Dog vest, and then lie if they are challenged about me. But then they could take me anywhere they wanted and the place would have to admit me.

Think about how damaging this could be to real Service Dogs and their humans. As a fake and untrained Service Dog I would likely misstep and ruin the reputation and the real need for humans who rely on these dogs.

Also for sale is the designation: Emotional Support Animal. This is an untrained animal of almost any species that provides solace to someone with a disability, such as anxiety or depression. To become an ESA, a human needs a letter from a licensed mental health professional that verifies his/her emotional or mental need for the animal. Under The Fair Housing Act and Air Carriers Act, ESAs are allowed to be housed in apartments and hotels where most animals would be denied, and on airlines to fly for free. In this case, proof as in the form of the letter can be required.

Again, the offering of emotional support can be a legitimate need that an animal can meet.

But scammers have figured this one out too. A human can “buy” such a letter at online sites for $140. Along with a credit card number, a human submits an application and then will be interviewed by a Mental Health Professional over the phone. With or without the letter, a certificate is available for $29, and a mesh vest that states “Support Animal” for the pet costs $44.95 (currently on sale for $39).

And the scammers are out there. Just ask anyone in Sarasota who works a front desk at a restaurant, hotel, library, or lobby entrance. Although the ADA currently recognizes only dogs as potential service animals (and some states expand this to include miniature horses, pigs, and capuchin monkeys), humans present all types of animals with certification tags.

A favorite example involved a human entering a library with an alleged service “baby racoon.” This one was almost too easy:  Could a baby animal have had training? An undomesticated animal like a racoon? And exactly what service was being provided while it whipped around like a Tasmanian Devil in its crate?

Others are harder to spot. Can a llama be a comfort animal? An iguana? A deadly viper? Can a tiny terrier be a service animal? It depends…

So, a big Bow Wow shout-out this Labor Day weekend to dogs and other animals who serve.

A big Grrrrrrr to humans who undermine these animals and their owners by cheating the system.

To read more about this issue:

“Pets Allowed: Why are so many animals now in places where they shouldn’t be?” By Patricia Marx; The New Yorker, October 20, 2014.

One thought on “The Salty Dog: A Labor Day Weekend Salute to Service Dogs (by Karma)”