There are lots of websites you can go to that will list things to do while you visit Sarasota and I can’t disagree with many of those recommendations. Indeed, Sarasota is a wonderful place to enjoy a wide variety of things, from the marvelous Symphony Orchestra, to the world-famous beaches, to some of the best Cuban sandwiches in South Florida. But even paradise has some dangers and some things to avoid. Below are 10 things I recommend you not do while enjoying the Sun Coast.

1. Do not go wading in retention ponds. Sarasota has built a large number of retention ponds that help control flooding and mitigate the effects of storm-water run-off. However, since these ponds are freshwater and often connected to each other through a system of canals it is not unusual to find alligators in them at any particular time. It is not a good idea to go wading in these ponds at any time of the day or night, as Matthew Riggins would tell you (that is, if he was still alive to be able to talk to you). Riggins was a not too bright alleged burglar who was breaking into homes in Barefoot Bay when he was interrupted by the police. He fled and apparently thought it was a good idea to hide in a retention pond not far away. The police found him, or what was left of him, a few days later.

2. Do not ride a bicycle. Riding a bike anywhere in Florida is a dangerous proposition. Florida ranks second in the nation in bicycle fatalities. While the Legacy Trail is a wonderful 11-mile bike path between Palmer Ranch and Venice, avoid biking on our roads. Of the 2,300 miles of Sarasota roads only 313 miles have bike lanes. If you are one of those crazy biking Europeans and insist on biking, at least avoid Fruitville Road. For some reason drivers on Fruitville have a higher propensity for running down cyclists than drivers in other parts of the city.

3. Avoid drinking Florida wine. Climate, soil richness and mineral complexity are the most important factors involved in producing fine wine. Unfortunately, Florida’s climate and poor soil do not lend themselves to producing very good wine. Most Florida wines are fermented from the muscadine grape, also called the scuppernong grape. It produces truly disgusting wine. On the positive side, however, is the fact that it’s pretty hard to find many wineries—there are only 24 in the state. Unless you like really sweet wine that will leave you with a headache, I recommend you skip this unique experience. 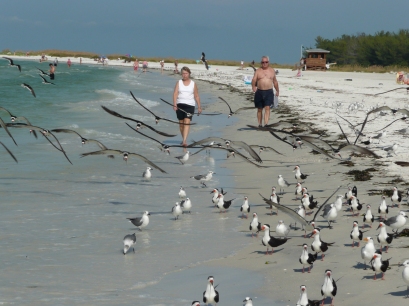 4. Do not walk down the beach with a hot dog. The major beaches have concession stands and serve a variety of beach-type foods. I prefer hot dogs with everything on them (I call them “Spiroffs”). If you are at the beach during a busy time there is a tendency to take your food back to your beach towel rather than wait for a table. Beware! The birds on the beaches are aggressive thieves. They have no fear and will launch an attack on your hot dog with surgical precision if they sense even the slightest opportunity. Don’t let your guard down or you will find yourself returning with an empty bun.

5. Do not buy a Dolphin Towers condo. The Dolphin Towers is a 117 unit, 15-story downtown condo with a stunning view of Sarasota Bay. Five years ago you could buy a unit for $30K, and today you can still buy one for less than $300K. Quite a deal, eh? Well, maybe. In 2010 Kris and Rick Mowery had to pry open the door of their fourth-floor unit to enter only to find cracks throughout their unit. It appears that the fourth floor concrete was deteriorating and the entire building was in danger of collapsing. After six years and $9 million of renovations the Towers is back in business. A number of units are still available at exceedingly low prices. I recommend you pass on this bargain.

6. Do not drive across the Everglades at dusk in September. September is love bug mating season in the Everglades. Females emerge from their larvae, often around dusk, and are grasped by males. The pair fall to the ground in a loving embrace and when they have finished “coupling” they take flight, often into the path of a speeding vehicle (i.e. your car). Unfortunately for the bugs as well as your car, love bugs are, for some strange reason, attracted to automobile exhaust fumes. The predictable result is that your car will be covered with love bug carcasses. While we can all lament the death of those tragic lovers your immediate problem will be to try to remove the gooey mess that covers the front of your automobile. This is not an easy task. If you must cross the Everglades during this time stock up with water, a Bounce dryer sheet, and baking soda. Good luck!

7. Do not ride a Manatee. One of our more lovable wild creatures is the manatee, or sea cow. These massive beasts are vegetarians and not afraid of humans, so that inevitably has the potential for problems. In the summer you can find them in the bay and even along the beaches. In the winter they hang out near the Apollo Beach power plant to enjoy the warm water that is released as a by-product.

Because Floridians do stupid things it is not surprising to find that people attempt to ride manatees, even though there are laws that make that illegal. A few years back Ana Gutierrez rode one in St. Petersburg and last year some idiot tried to ride one at Siesta Beach (fortunately he was too drunk to actually get on it). But perhaps even more surprising was the response to all this manatee riding by a representative of the Florida Tea Party, Dr. Michael Coffman, who lamented that outlawing manatee riding represented a loss of personal freedom. “Today we can’t ride a manatee, tomorrow we won’t be able to open a business,” he insightfully noted. I suspect the manatees don’t view this as an issue of personal freedom.  Leave the manatees alone!

8. Do not train to run in a marathon in the summer. Sarasota is one of the healthiest places in America. Residents run, swim, kayak, bike, paddleboard, play tennis, golf, cricket and pickle ball, and, of course, jog. Even being a bit older than most doesn’t seem to slow people down very much—there’s always bocce ball. But year-around residents (‘rounders) have some common sense about when to exercise and when to slow down. Summers in sub-tropical Florida are hot and humid and it is a time to carefully moderate your exercise and hydrate when you do exercise. With average high temperatures in June through September in the 90s it is not time to train for that marathon.

9. Do not feed the Monkey Squirrels. Sarasota is home to what locals refer to as “Monkey Squirrels.” Mostly they live in Florida, so people who live elsewhere are probably unfamiliar with them. They got their nickname when a woman in Polk County called the Sheriff’s Office to report a wild monkey. The police also thought it was a monkey until they trapped it and took a closer look. It turned out to be a protected species called Sherman’s Fox Squirrel.

Monkey Squirrels are a bit strange. Not only do they have the face of a monkey and a large bushy tail, but they don’t run like squirrels—they move with a rather odd-looking hop. Even stranger is the fact that they are extremely tame; you can walk right up to them and they won’t budge. On the golf course they have been known to steal golf balls, even when the golfer directly confronts them. Such domesticated behavior should not be encouraged, so please don’t feed the Monkey Squirrels.

10. Don’t leave Sarasota without buying artwork from a local artist. OK, this isn’t really a “don’t do,” it’s more of a “must do.” In addition to being called the “Sun Coast,” the area is also referred to as the “Cultural Coast” because it possesses high quality theatrical troupes, a symphony, an opera, a wide range of music groups, a yearly film festival, and it attracts artists of all ilks. If you want a “piece of the Sun Coast” make sure it’s created by a local artist and gives a feel for or depicts a local scene.